He was born in Tottori Prefecture (west coast of Japan) in 1983.
His first fascination for lacquer crafts started in high school.
In 2004 he entered the University of Toyama Takaoka National College majoring lacquer techniques in the lacquer craft course.
After graduating in 2005, he began his studies under Murose Kazumi who is a holder of Important Intangible Cultural Property of Japan,
in order to master the lacquer craft. In 2015 he was awarded with the Commissioner Award
of the Agency for Cultural Affairs during the 32nd Traditional Japanese lacquer Exhibition.

Urushi is an art technique that is used for creating lacquerware by covering or drawing patterns
on the surface of the art piece with sap out of lacquer trees.
After applying lacquer on the object, a very strong coating film is formed.
In ancient times people used it for creating arts and crafts such as painted tableware and jewelry.
Ornaments painted with red lacquer dating from the Jomon period (± 9000 years ago) have been discovered in Japan.
Taking advantage of the strong and beautiful features of lacquer, people have produced box cases for important costumes,
furniture and interior ornaments. Furthermore the surfaces were also decorated with gold, silver and shells.

Maki-e is a technique originally developed in Japan as a representative lacquer art.
Its first use was found around 1200 years ago. While the artist is drawing a pattern with lacquer on a vessel surface, he put gold,
silver or platinum powder on it before the lacquer dries and hardens.
This delicate and gorgeous expression is a Japanese original feature. There are different techniques of maki-e namely Togidashi-makie, Hira-makie, Taka-makie,
which are used in various ways depending on the wanted result. 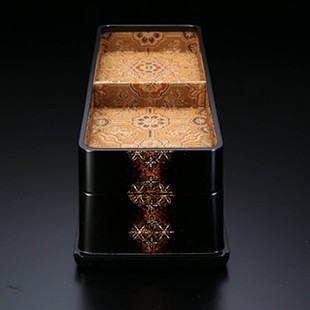 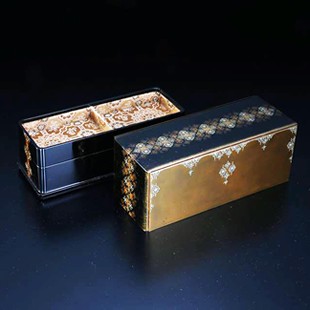 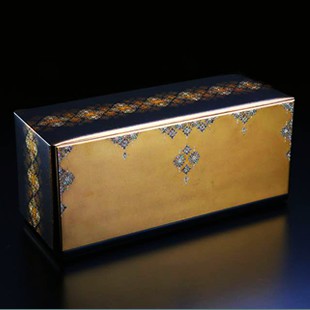